One thing you may nor may not know about me is that I like to write. However, there's a good chance that you'll find my literature to be substandard. Awful. Disappointing. On the off chance that you're a nice person (or other animal that can read) that doesn't hate my writings, then you may like to read some of my work. Any fan fiction that I write will be accessible from the fan fiction menu (wave your mouse over the fan fiction tab on the menu, then another menu will appear with links to my stories.

If you can't find them, then here are some links

A Night on Gallifrey - in an old castle, a terrible decision is being made
Wuuuuu-uuu-uuu - a short story about Doctor Who meeting a boy
Life of a Sensuous Adric - Adric makes a love potion
Life of a Sensuous Adric 2 - A sequel to Life of a Sensuous Adric
The Return - a followup to Wuuuuu-uuu-uuu
Rise of the Reapers - The conclusion to the Wuuuuu-uuu-uuu trilogy
Super Sleuth - There's a super sleuth! Her name is Sexy Voord!
Super Sleuth 2: Sleuth Harder - Sexy Voord is back, and this time she has an assistant
Dr Who Goes to New York - An exciting adventure, where Dr Who goes to New York
The Poo in Space - Poo Planet is under attack!
Dalek Leef - Dalek Leef is given a mission: kill Alpha Centauri!
Super Sleuth 3: Meet the Paternosters - Sexy Voord goes back in time and meets the Paternosters!
All Black Dinosaur - Dr Who plays rugby
Diamonds are Forever - Starrcade. Ric Flair V Hollywood Hogan and the nWo. Flair needs all the help he can get.
Laundry Day - It's time to do the washing!
Life of a Sensuous Adric 3 - Adric and his team decide to journey to the Planet of Women
Super Sleuth 4: The Evil Astronomer - An evil astronomer is plotting something dastardly...
Assimilation Cubed - Once again the TARDIS encounters USS Enterprise
Super Sleuth 5: The Evil Astronomer Returns - A sequel to Super Sleuth 4: The Evil Astronomer
Super Sleuth 6: Floppy - Earth is in danger from a vengeful dolphin
Alpha and Friends - Sometimes called Super Sleuth 7: Alpha and Friends. Alpha Centauri hosts a tv chat show, but there's sabotage...
Super Sleuth 8: The Devil Went Down to Auckland - It's Sexy Voord V the Devil
The Trouble With Ghosts - England. 1344. There are ghosts afoot!
If Only She Had Knees - Alpha Centauri is in trouble!
Floppy's Sister - Earth is in danger again. And this time, Sexy Voord is not around to save it.
LOL RIP - Alvin Stardust has passed away :(
They Had To Die - The Doctor and Clara arrive on the Titanic
Mighty Genghis Khan - the Tenth Doctor meets Genghis Khan
Mighty Genghis Khan - the Sequel! The Tenth Doctor gets the Third Doctor to help him interact with Genghis Khan
For Better or For Worse - An insight into the lives of Rose and splinter-Tenny in the parallel universe
Dr Who Goes to the Beach - you can guess what happens based on the title
The Curse of the Gugelhuff - The Gugelhuff invade!
How Benton Became Gay - the story which reveals John Benton's sexuality
Flight Crew - Something strange is happening on the USS Enterprise
The Day the Music Died - a terrible moment for the Tenth Doctor
Go To Sleep - CM Punk visits the Tenth Doctor
Bouffant - An exciting tale featuring Sean Pertwee
The Future of Porridge - What happens to uneaten porridge?
Jet Ski - An exciting tale on a jet ski
Suffragette City - The Tenth Doctor goes to the football
Dividing By Zero - It's time for John and Gillian to do their maths homework
Swimming Pool - The Tenth Doctor goes swimming
Roll With It - this story features Meat Stack
Meat Stack Explores the TARDIS - Meat Stack is inside the TARDIS, and meets an existing companion
The Funeral - There is a funeral
There's an App For That - An exciting multi-Doctor adventure, featuring a brief glimpse into the Time War
Bang Bang - Nick Briggs visits a fan
The Streak - Exciting wrestling action at Wrestlemania 30
Regan the Elephant - A short tale about one of Barbara's history classes
Mein Kampf - Hitler has visitors
Don't Look Back in Anger - Whatever happened to Jimmy Savile?
Heart - A story about Glitz and Mel
Aussie Eggs - A short tale introducing Virat, Sexy Voord's new assistant
​Broken Faith - the conclusion to the Chris Benoit saga, which began with The Funeral.
The Short Story Featuring Admiral Ackbar - Ackbar goes to a comedy show
Curse of the Piwakawaka - The Doctor is in danger!
Don't Stop Believin' - AJ Styles is now part of the TARDIS crew
​Songbird - Something untoward is happening in the changing room
They Are Coming - The Galactic Federation is under attack!
Getting the Best of All Worlds - There's a new teacher at Coal Hill
The Korbut Flip may not have much to do with the holy Recipe Book, but it's incredible and needs to be seen. Even us non-arty gymnastics people can appreciate its beauty 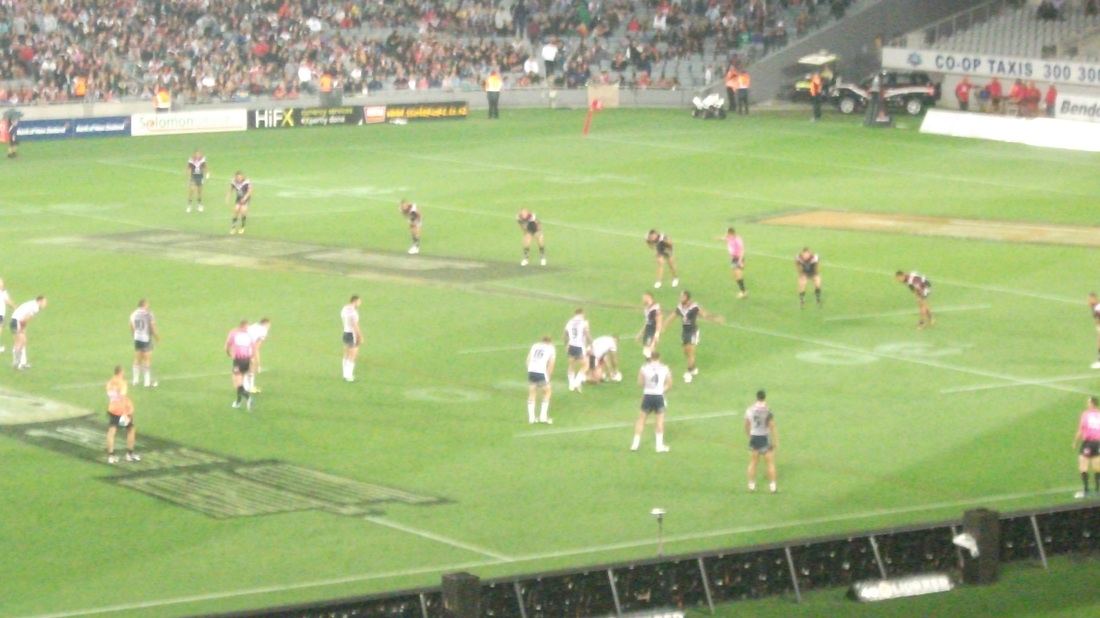 Ok, so that picture has nothing to do with my fan fiction of the Jon Pertwee Recipe Book. But that's fine. It's a photo during the SYDNEY ROOSTERS!!!! V warriors game at Eden Park in 2013. The almighty SYDNEY ROOSTERS!!!! (better known as Easts) won this game! They're my favourite team. EASTS TO WIN!!