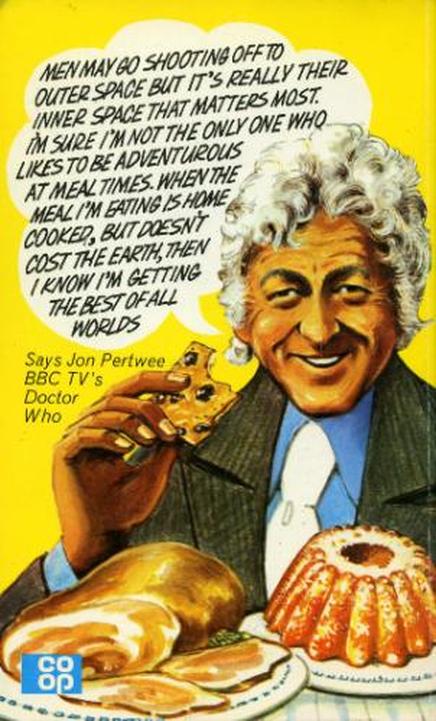 But what does it all mean(?), I hear you ask. Well, over the decades since its publication, many men, women, grasshoppers and the occasional aardvark have pondered those words. Countless debates have debated their meaning. However, the first written documentation of this comes in January 2011, from someone known as Doctor Dracula (sometimes referred to as War Doctor Dracula). I believe that his (or her) interpretation is still the best, so here it is:

". Pertwee really seems concerned about the contents of men's stomachs in the way that generally only women are, and I'm not being sexist.

I like the archaic way in which Pertwee refers to space travel - 'shooting off into outer space'. That's kind of how I'd expect an eighty year old grand-mother to refer to the moon landing in 1969. Or perhaps when the capsule landed, after the rescue team had got the astronauts out, JP would appear with a duster and a  pinny and mutter about how men are always shooting off into outer space.


Apparently John likes to be 'adventurous' at meal times. I felt a shudder of fear when I read this for some reason. He qualifies it by putting 'I'm sure I'm not the only one' before this, as if trying to convince himself that he isn't alone in his desire for 'adventure' around the said times of day.


JP is reassured that the meal he is getting was prepared on a property designated for habitation. And he likes the 'best of all worlds', where I believe he is paraphrasing Gottfried Leibniz from his work Essays on the Goodness of God, the Freedom of Man and the Origin of Evil(1710), in
Pertwee's case he is referring to a selection of cakes & meat.

In Pertwee's huge brown hand, we see what seems to be a bug-encrusted sweet meal. I can't see any in his mouth so I'm supposing that it was baked in that shape.


To return to the grandmother theme, the 'food' items on the table are very much what I would have expected to see served at gran's circa 1982. A floury sponge thing that looks like it might have a miniature Bond villain building a fortress inside it. The sponge thing seems strangely high-up on the table, like it's trying to get closer to JP.

The plate of beige-flavour meat on the plate seems nothing special - but look closely; there is a
minute  serving of peas to the side of it!! I mean, a microscopic serving of  peas!! Why bother? And why serve peas on the plate that seems to be designated  to carve the meat on?

Pertwee is wearing a nasty suit. And the  background is too yellow, as if somewhere around him Barry Letts was desperately  trying to key in a Drashig."